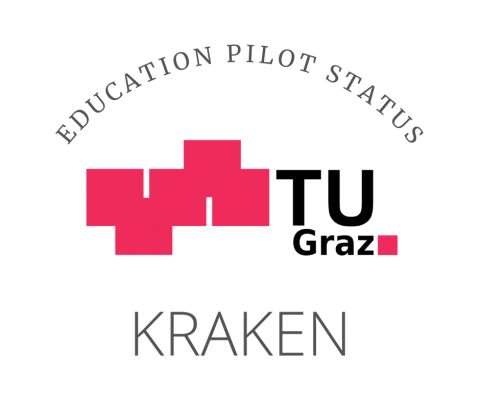 KRAKEN's education pilot allows university students to trade their academic records in a privacy-preserving way, and recruitment agencies to acquire this data and process it while keeping the student's privacy intact.

In this blog post, we give an overview of the KRAKEN Education pilot, and we take a closer look into the progress of the pilot's development.

To help university students to prove their academic achievements and to share them on the KRAKEN marketplace, the pilot enables students to retrieve their academic credentials (course certificates and diplomas) in a verifiable way.
This is done using the KRAKEN SSI building blocks, in specific the SSI Broker.
The KRAKEN SSI Broker follows the Hyperledger Aries communication protocols to establish a connection with the mobile phone wallet of a student, and issues credentials compliant to the W3C verifiable credential data-model to this wallet.
After this process, students can show prove of their academic achievements to any verifier in a sovereign way, for example when applying for a job or a study in another country.

The second pillar of KRAKEN's education pilot is the brokerage of this academic data on the KRAKEN marketplace.
This allows students to sell their data in a privacy-preserving way on the marketplace, without the need to trust the marketplace.
Another option is that university personnel exports the data in batch to the marketplace.
All processes ensure the consent of the students before even retrieving the data from the university API.
To ensure this, the pilot was designed in close collaboration with the legal experts from KU Lueven.

Check out the to learn more about the pilot and its objectives. 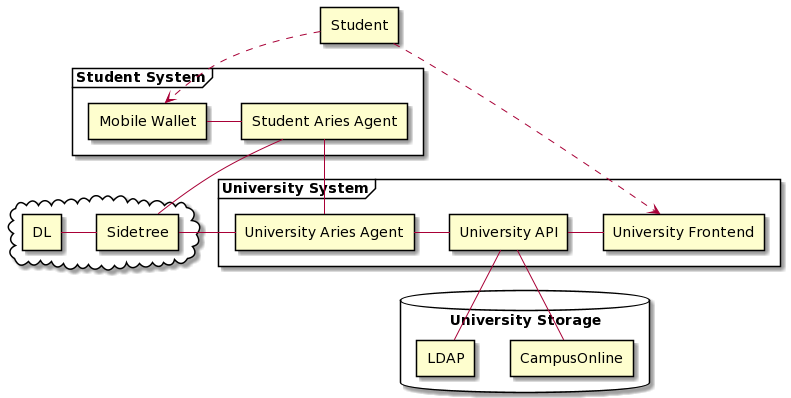 In the first month of the project, the Education Pilot team from TU Graz collaborated with our project partner from SIC to create the user stories for the pilot.
This was done in an iterative process and in parallel with the development of KRAKEN's architecture.
The final user stores for both pilots are presented in D5.1 and D5.2 (Pilot & Marketplace User Stores).

Afterwards, the user stories were gradually implemented, following KRAKEN's agile methodology.
The result of this implementation are several components, each providing a puzzle piece to realize the user stories.
On one hand, we developed components which extend the universities API to retrieve student data, as well as a frontend for students to connect their wallet and export (signed) credentials.
On the other hand, we provide several automated processes to deploy those components.
An additional goal of this process was a smooth integration into the KRAKEN marketplace and SSI system.
To ensure this was done in close collaboration with KRAKEN's marketplace teams from TEX and LYN, the MPC team backend from AIT and XLAB, as well as the SSI experts from ATOS.

All components developed for the KRAKEN Education Pilot are open source and available on the KRAKEN GitHub organization:

With the components already completed, students can retrieve proof of their academic achievements to present it to verifiers as well as sell it on the KRAKEN marketplace.
To also allow university personnel to directly publish this data on the marketplace, we are currently in the process of developing another exporter component.
While the current components is used by students to export their individual records, the new exporter will be used by university personnel and can export a batch of data from multiple students.
To ensure the student's consent for their data to be used during such an export, we are going to extend the existing interface with the possibility to grant this consent.
Without this explicit consent, a student's data will never be exported from the university.

Additionally, we are in the process of implementing an additional use case to demonstrate the power of the KRAKEN SMPC engine.

In this use case we will allow data buyers to combine data of different types in a privacy-preserving analytics computation.
This enables computations that would otherwise legally not be possible, for example computing a statistic using education data combined with other demographic data.

For this evaluation a demonstrator deployment of the KRAKEN University Exporter is provided at TU Graz, connected to the universities API.
More details on the evaluation study results are presented in D5.7 (KRAKEN marketplace testing and first validation report), they were briefly introduced at EBDVF in November 2021.
Additionally, we presented the results of the first evaluation in an academic paper, published in the Applied Sciences journal.
This publication was a joint work of edu pilot lead TU Graz (TUG), usability experts from Fondazione Bruno Kessler (FBK), KRAKEN's project coordinator ATOS, and the Centre for IT & IP Law at KU Lueven (KUL). 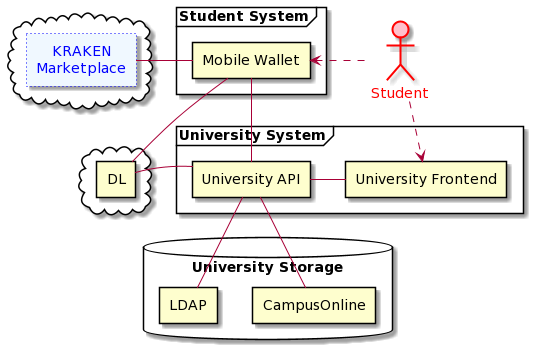 A second evaluation of the project's final results will be conducted in fall 2022.

If you are curious to experience KRAKEN and want to participate in this evaluation, please check out the UX testers recruiting! page, or contact sgabrielli@fbk.eu directly and ask for details.